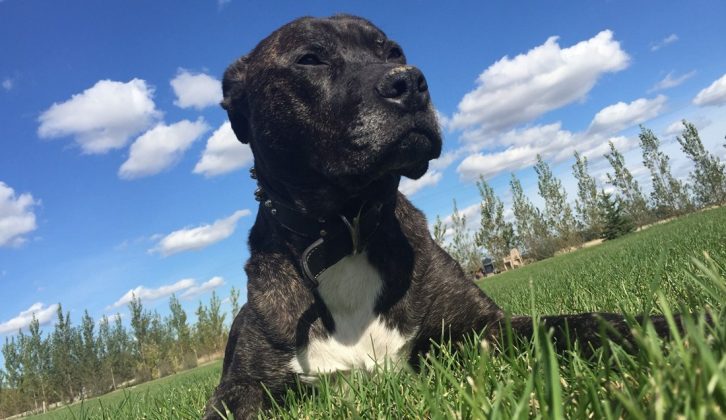 Harley’s Story: Pemphigus (rare Autoimmune Disease) and how that Worked Out.

NOTE:  This dog, even the VP at NZYMES® told me I wouldn’t be able to save because it was too far gone.  But, with determination and faith, I did it!! ?   We even had a vet come from Toronto Ontario to see Harley.  He’s the #1 Allergy vet in Canada.   He’d heard of his story, and couldn’t believe Harley was still alive.   He wanted to see him for himself.   But, he wanted no part of anything to do with the regimen I had used.  No interest whatsoever.   And in fact, was in disbelief that my regimen had done this, and wanted Blair to put him on steroids and antibiotics.  Blair refused.  So, the Vet is part of the story, but I can’t really use his name or anything, because he doesn’t care to Believe.

So, here is Harley’s Story – of Pemphigus Challenges, and how that went…

In September of 2015, I received very sad news from a customer of mine.  Harley, his 8 year old Bulldog-mix, was very sick.  Harley had originally started getting ill in May of 2015.   He’d been to numerous vets, all with no answers.  But, something was terribly wrong. He was getting blisters all over, which would burst with pus, leading to constant bleeding; hence making a huge mess in the house.  Skin scrapings were performed, with no answers.   Harley stopped eating.  He started losing weight; 30 pounds over a short period. He became a shell of a dog. He was miserable. Nobody could tell his owner what was wrong with Harley, and his prognosis wasn’t looking good. He was slowly dying.  His owner knew he was going to have to make a very painful decision in the next few days.  A decision that his wife, family and numerous vets, urged also.  “Don’t make him suffer any longer” is what he was told.

NOTE:  See photos of Harley’s symptoms with slide show at bottom of screen.

I immediately got in touch with Stan, the VP of NZYMES.COM, and sent him the pictures of Harley’s paws.  I told him the issues, and how this was a ‘911’ situation.  He told me that it sounded like this could be Pemphigus.  However, if it was, it would be too late to treat Harley, as Pemphigus needs to be treated with heavy doses of steroids right at initial diagnosis. And this was now 5 months later.

I researched Pemphigus, and found that so many symptoms, seemed to add up exactly with what Harley had been going through.  The shoe fit.  Pemphigus is a rare autoimmune disease.  With an autoimmune disease, the animals own immune system will begin to attack its own healthy cells and body.  For Harley,  this lead to the painful blistering of the skin, mucous membranes, paws, face etc.   Knowing what I now knew, if this was all true, could I help save Harley? Or was it too late, as all was pointing to?  I knew, I had to give Harley everything I had, if he was going to be saved.

I asked his owner if Harley had been tested for Pemphigus.   With all the tests they’d done, it seemed unlikely that they wouldn’t have,  but, we had to find out.   Harley was returned to the vet, and sure enough, tests confirmed that it was Pemphigus.  My heart sank.  They put him on steroids, but it only made matters worse.

Now, Harley had quickly progressed to the point where he was confined to the garage. Because of his bleeding, and constant uncontrolled urinating from the steroids,  he just couldn’t be in the house.  It was heartbreaking for the entire family.  And this? This was becoming another one of my biggest challenges.  I HAD to save Harley.

I knew that because Harley hadn’t been eating, he hadn’t been getting NZYMES® for many months.  I needed to give him something that he would be able to ingest, and that would give him the biggest ‘bang’ to help him recover.

Harley starting getting 2 products.  The first, being Medi-Paws. It is a form of ‘medical marijuana’ for animals, in an oil form derived from Hemp.  This was for the pain and swelling, to aid with whatever relief was possible.  It is also quite effective at getting animals to eat, that have lost their appetite.   Second, colloidal silver, a natural antibiotic.  I knew that this would help him fight off any infections.  It was used internally a few times a day, and externally on his sores.   I was doing everything I could to ‘put the pieces’ together, so that I could give Harley the best chance.  This, was one of my biggest challenges.  Never before had I been up against something this ‘dire’, and Hopeless.

I knew without a doubt, that Harley was going to be one of those cases that I would never forget.

We started everything October 1, 2015.  Days went by, leading into the second week of October. No improvements.   As much as I felt despair, I felt that maybe, Harley just needed a bit more time.  He was so very sick after all.  ‘Just keep on doing what your doing’ is what I told his owner. Don’t give up.  Every day I waited…hoping that it was ‘the’ day that things might change.  It was into the second week,  October 11, that I got the news.  Harley was doing better!!  He was making a turn around!!!  His scabs were getting better, he was beginning to eat, and was also back on NZYMES®.   Now, into the third week? Harley went on his first walk in over two months! His changes? ‘Insane’ according to his owner.  ‘He is back to his old self, and, even running!!!’  Harley has gotten better!!  He has made it!!  ?

Harley has truly defied the odds.  With remarkable results.  We are all just stunned at this incredible success.   Even the vets, are shocked that he is still alive! For a dog who was days away from having to be sent off to the Rainbow Bridge, to the dog who is now fully enjoying life again.   I cannot even begin to express how very proud I am of his owner.   For following my advice and seeing it through.   We never gave up.  We GOT this!!  From such sorrow, to joy.   As I always say, ‘Don’t Stop Believing’.  ❤️

Harleys Feet/Paws were among the most troubling of his symptoms areas.