Nicolas’ Journey back to Health 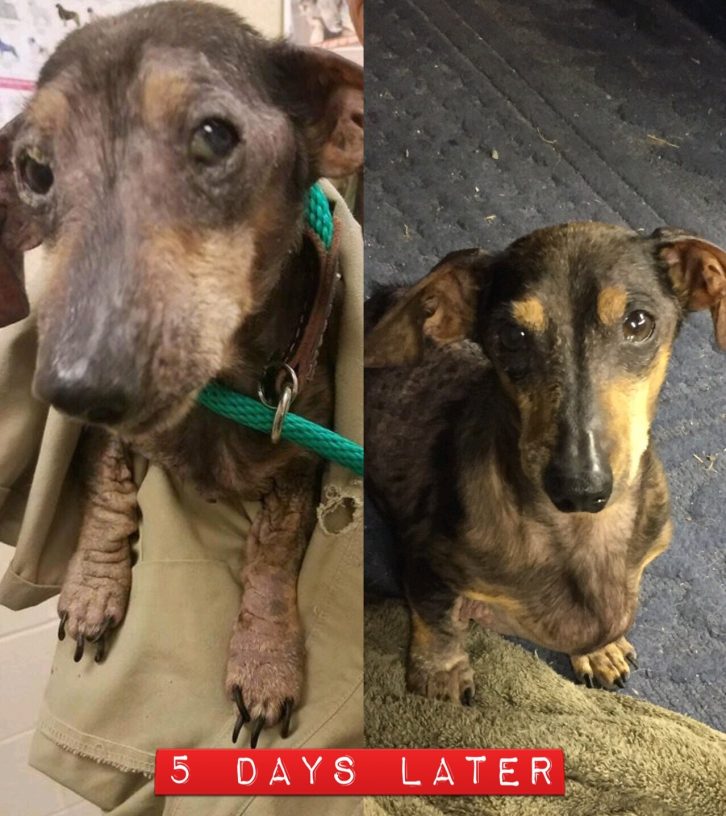 Nicolas, a Sweet Boy in need of TLC

Finding Out About Nicolas

I first found out about Nicolas through my good friend Susanne on April 20, 2018.  Susanne is the transport coordinator with a local rescue, Before the Bridge.  Before the Bridge Senior K9 Rescue is a volunteer operated registered charity located in Stony Mountain, Manitoba. Their main focus is on rescuing senior dogs, some who have been surrendered,  or abandoned in a pound, and help to find them their safe, Happily Ever After, Forever Homes.

This is just my kind of rescue!  I have always been drawn to the ‘unwanted’ dogs.  Ones where the owners or vets have given up, and have left the dog behind.  The older they are, the more drawn in I am.   As Before the Bridge mission statement says “Love is Ageless”.   I believe every dog deserves to live the best last years of their lives,  having been given the very best and loved immensely, right to the end.

Susanne and I have been friends for a while, brought together by health issues with her own dogs, Spike and Nigel, both with heart conditions.   It didn’t take long for Susanne to see the benefits of what Nzymes could do,  and in short time,  many of the Before the Bridge fosters were on Nzymes the moment they arrived.  Director Judy Smith-Hill has many of their permanent fosters on Nzymes also.

“Before the Bridge Senior K9 Rescue places dogs with loving foster families, who care for dogs until they find their forever homes.

The foster families and volunteers are the foundation of Before the Bridge and without that support and love, we could not operate.

BRENDA JOHNSON is one of the foster families with a difference.  Brenda likes the tough cases, the sick little seniors with allergies, hair loss etc.  Nicolas is such a senior who came into rescue on a Sunday night void of hair and that all too familiar smell of yeast all over his body.   Brenda put him on NZYMES, Colloidal Silver, raw food and the list goes on.  By Thursday Nicolas looked like a different dog.  His hair is starting to grow, and he has peach fuzz all over his body!  I am delighted and grateful that Brenda wanted to foster this adorable, sweet senior with a zest for life and make him well.

When Susanne asked me if I’d be willing to take in an 8-year old dachshund with skin issues,  my answer was immediate, Yes!! She told me that he’d be arriving in 3 days.  I was so excited!  I hadn’t had a ‘fixer’ in almost two months.  I always feel empty when I don’t have a dog here that ‘needs’ me,  so this was perfect.  I felt fulfilled again knowing I was going to have this opportunity with Nicolas.  To me, he looked like a mini version of Gunther, so I was very confident with tackling his condition.

Nicolas had been in a shelter since March.  He’d arrived in the terrible condition, and had endured a vast array of tests and treatments,  including steroids, antibiotics, thyroid medications.   He had gotten a slew of immunizations, as nobody knew if he’d ever had any.  The list of everything he’d received in a very short time, was SO much! I knew that it definitely couldn’t have helped his condition.   He’d also had a lot of rotten teeth, and had all but 3 removed.  I was thankful for that as it meant he didn’t have the infections from that hindering his health also.   The plus side though to everything, was that knowing Nicolas had never been to a vet before showing up at the shelter, and all the medications that had been administered, had all only been for a short time.  This was going to work to my advantage, and his too,  as I didn’t have to ‘undo’ years of over-vaccinating and medications.

It seemed like Sunday was never going to come.  That was the day Nicolas was due to arrive.   Susanne messaged me when she had Nicolas picked up, and told me that he was a ‘red hot mess’.  His picture, he just looked so sad.  I had no idea what the rest of him truly looked like…

All day, I anxiously waited for 5:30 to come.  My daughter Turi and I went to go pick him up.  On the way, I asked Turi ‘what are you all going to do for Nicolas?’  She started telling me all the things that she knew he was going to need for his recovery.  I smiled proudly because I love that she knows everything to do for these animals as I do.  We have such a ‘team’ here. (See Brenda’s Nzymes-based Feed Program)

When we first saw him,  he was shaking, scared and very sad looking.  His skin fire red hot,  and he clearly didn’t to be touched.  His underbelly was black, and he had yeast coming out everywhere down there.   Sadly, he really WAS a ‘mess’.  But I knew that in a short time, we were going to have him have what would be his very first ever raw meal, with all the supplements to help boost him back up to a healthy state.

Day 1 – When we got Nicolas home,  he came to ‘life’.  He marched into our house, checked things out, and ‘owned’ the first toy he found.   We took him outside, and he went to go check out the garage, with his toy.   There, he wanted to play.   But not just play, but play fetch!? A dachshund playing fetch??? This I’d never seen before!  He and Turi began their own little game,  and he began to ‘talk’ to us.  His bark was hilarious!! He totally had an old dog bark!  He had so much fun with Turi.  We all loved watching him.  He didn’t appear ‘sick’ at all.  Full of life, and happy as can be.  He got along with all the other dogs, and could care less about the cat! He was more than happy to devour his first meal, and wanted more!  I could only assume he’d never eaten that well, his entire life.

Bathtime – After his meal, it was time for his bath.   My favorite shampoo for dogs with chronic skin issues is the brand Reliq.  Either the Rosemary for the worst skin conditions or the Green Tea for the ones not as bad.  There was so much yeast and skin coming off of him,  I knew that this bath was important to be able to provide some comfort to his dry, elephant-like skin.  The top side of Nicolas wasn’t as bad,  that wasn’t red and hot.  It was his underside which looked the worst.  I can’t even imagine how terrible he felt.  Even after his bath,  he did not want to be touched.  He would move away from our hands, clearly telling us that his skin didn’t like the feel of it.

The next few days – Nicolas slept a lot.  I knew this to be normal, as he was experiencing a detox, which was evident in his bathroom trips.  This, and the gunk coming out of his eyes were strong indicators of the cleansing going on within his body. The body does its best work when at rest, so I understood the importance of letting him have that much-needed sleep.  Having been in a shelter for so long, I’m sure there wasn’t much sleep available in such a high-stress environment.

When he would wake up,  he would demand we play with him.  He’d sit and bark at us if we didn’t pick up his toy and throw it. He began to engage with the other dogs,  mostly Beanut, our dachshund.  But the dog of ours that loves him the most, is Bohdi, the Border Collie.  Now he has another dog to ‘Border Collie’ and watch his every move.  Bohdi loves to get to the thrown toy first,  and then let Nicolas come and take it away from him.  Nicolas will often ‘grumble’ at Bohdi, but Bohdi will just turn his head away as if he’s ignoring Nicolas and will continue to follow him everywhere he goes.  It is very entertaining to see the two of them playing this ‘game’. By the 4th day – Nicolas was a completely different dog.  Now he was starting to be more awake, more alert, and not sleeping his days away.  He would follow me everywhere I’d go in the house,  and he’d constantly be ‘nudging’ my legs to let me know he was there commanding attention.  If I wasn’t able to appease him, the whining and barking certainly told me that I needed to stop whatever I was doing, and devote my time to him.   Of course, I did so happily, as I was enjoying watching Nicolas become Nicolas.

By the 5th day –  it was very evident that there had been huge progress made.  His ‘before and after’ pictures were outstanding! Almost unbelievable!  It was hard to fathom that this red, naked dog, just days earlier, had been in as rough as shape as he’d been.  Both Judy and Susanne came over on this day just to be able to see him for themselves.   When you see him in person, you can see that he’s got little peach fuzzy fur beginning to grow everywhere on his body!! Crazy to see this after only days later!

We are currently on the 8th day,  and now you can begin to see the fur coming in more and more all over his body.  His energy, his personality, is all ‘here’ now.  He LOVES to be petted and wants to be on the couch with someone, snuggled up.  Lots of kisses for everyone, and always wants to be close by to someone.

I am SO excited to see where he’s going to be a week from now?  With this progress having been achieved so quickly, it is unfolding into a Cinderella story.  But, I do believe that he will make a full recovery, and is going to be in his Forever Home sooner than we originally thought.   I have no doubt, that whoever ends up getting this sweet little man,  is very lucky.   If we could keep him,  we most certainly would.  I, however, need to keep my ‘door open’ for other dogs just like Nicholas to be able to come here and have a full rehabilitation before the next ‘step’ of their Journey.

I am excited to be able to share Nicholas’ progress with everyone going forward.  My wish is for someone to see his condition, and find Hope within that for their own dog, regardless of their age.  As we already know,  Love is Ageless.

4/30/18 – Nicolas’ regimen starts with Nzymes. He also gets raw-fed with Mountain Dog Food (he loves this by the way). Our Daughter, Turi makes sure Nicolas gets all he needs… Here she is preparing his dish.

Dental Treats and Seizures
Eli's Story - Joy in my Sorrow