My little 6 year old dachshund/Pomeranian dog Kylie cried in agony on the way to the animal hospital. She had injured her spine. She had lost all bladder and bowel control and had no sensation in her hind legs. We were told time was of the essence and she needed surgery within the week if there was going to be any hope of recovering any mobility. Her condition continued to deteriorate. Infection set in, she began to bloat and retain waste and her paralysis progressed. We were advised again to consider surgery or accept that she would deteriorate further and suffer so putting her down may be necessary. Putting her down was not an option emotionally, and financially, surgery was not possible. So we prayed as we have never prayed before for our little Kylie. She was exhausted, I was exhausted, we both stunk and could barely get out of bed. I began to search the INTERNET and cried out, “Lord, I need a miracle. My dog needs to walk”. Pages and pages of conventional medical solutions popped up, and then I came upon the NZYMES.com page.

Immediately, I phoned (their offices in) Las Vegas. I was told the soonest they could get the product to my U.S. mailing address was a week. We did not have a week. Then the attendant remembered that they had a new Canadian distributor, Brenda Johnson, “she is in Manitoba, is that near you?” I live in Manitoba! My hope soared as I realized I may be mere hours away from help! I contacted Brenda who told me she lived in Winnipeg and asked where I was. I told her the name of my town and she was passing by it at that very time on her way back into the city. Within ten minutes I went from a call to Las Vegas to NZYMES arriving at my door. Brenda was a mess on her way back in from camping, I was a mess having barely managed to keep up with Kylie let alone myself. We hugged and cheered and prayed. And that, is when our journey of complete recovery and hope began. This was 8 days after her ‘injury’. 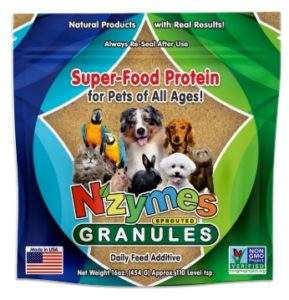 After Kylie’s first day on Nzymes and Ox-E drops, she was out of her bed and moving with the support of a rolled up towel under her belly. She was bloated and weary but desired life. By the second day, she was smiling! She pulled herself forward, dragging her limp little back legs behind her. We were told we’d never again see her little wiggly bum or pigeon-toed walk, and her ever-wagging happy tail would remain sad. On the third day, she went on a car ride. We had to show her off to her friends and the vet. It was clear there was no hope to be found in the animal hospital for symptom relief. The little bit of progress she had made in the three days was perceived as denial on my part about the true nature and extent of her injuries and the inevitable prognosis. They however, did not know Nzymes, they did not know Kylie and they did not know how much God loved her. The whole community was about to witness a miracle.

March 17th, 2015 was when Kylie began NZYMES®. By April 8th, Kylie had been weaned off all medications and had taken it upon herself to launch herself from the bed to answer the door. Between those two dates, we did tail-tugging, I gave her massages, we cuddled a lot, she floated several times a day in the tub at first, to wash off the urine and feces that fell out of her body. But, after a while because she was just so happy to be floating, fully upright unassisted and paddling. We would help her to walk about by using a scarf as a sling and supporting her rear. April 8th. Kylie disappeared! I had put her outside for a few moments of fresh air and snow-rolling and she was gone! I cried out for her and she poked her head around the corner of the house as she had done only months before. Bathrobe clad and bare-footed, I ran over to her and she ‘took off’, dragging her little self along the sidewalk. I propped her up with the sling and she was off. She ran me around the house for the whole street to see. Later than night, we repeated the adventure for the family. Her tailed wagged briefly and she wanted to stand for a moment at the door all proud when the scarf was removed before lowering herself to sit. She was getting stronger!

Kylie’s progress was slow but steady in the weeks that followed. The animal hospital staff were divided. Some clearly began to hope on the unimaginable while others held to any perceived progress being my inability to accept reality. By week six Kylie was beginning to stand on her rear legs and slowly lower herself to a sitting position. Her little brother who relied on her sight was her biggest champion and companion. By the seventh week, both Kylie’s back paws consistently responded to tickling. Again, we were advised her progress might be short-lived and her paralysis would recur. She would need a wheelchair; she would never walk again. But, they did not know Nzymes, Kylie and our God, who now had the whole neighborhood’s attention.

April 21st, 2015, Kylie ‘tore off’ after the vacuum – dragging her little legs behind her and it was a war.  It was not as exciting the second time when trying to capture it on video; however she was now using her back legs to push herself forward. This was perceived as just a more comfortable permanent position by the medical staff. Nope!

Pushing herself forward was soon followed by actually flipping her legs forward, and by May 15th she was racing across our yard, wobbly, fighting the slope of the property to greet all the neighbors as they returned home. Her brother goaded her along in play, the children lavished praise over her, adults stood weepy-eyed, incredulous, and Kylie was back to owning the block. May 20th she let herself out and refused to come in from the rain and by the beginning of June, 2015, we walked Kylie proudly from our home, around the block and into the veterinarian’s office to show off her victory over paralysis.

Kylie walked, unassisted, tail wagging, pigeon-toed and wiggly-bummed all the rest of her days until she passed. She fiercely protected every home

she determined was hers to cover, she greeted everyone and walked them down the street, she played, rolled over stink bugs and worms to kill them humanely, she buried and unburied and buried again all her treasures, she took herself out to feast on earthworms and deer poop making weight management an issue right through to the end, and she dropped and rolled onto her back when called just itching for a lay-in-the-grass-with-me cuddle. Kylie fully recovered and the Brenda/N’zymes community that wholeheartedly supported us and all those whom she loved, celebrated. She was never intended to live ‘Disabled’, instead she had been “N’abled”.

Kylie was the main reason behind the N’zymes N’abled title for this site. Everything, does happen for a reason. We just have to have faith and hope and know that our paths, which are laid out before us, and are meant to be followed. Never give up. — Brenda Johnson 💕