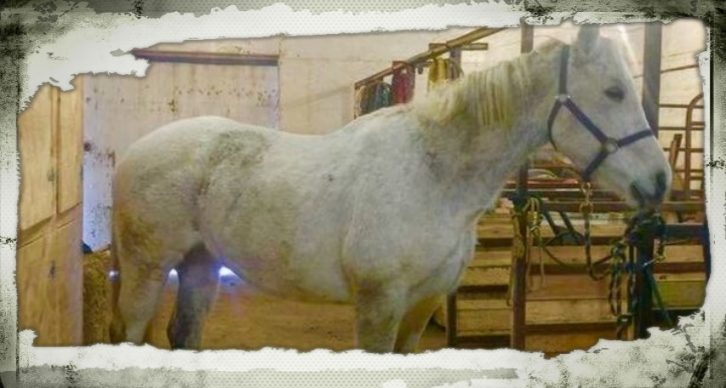 PREFACE: This incredible story was brought on by someone who came to me, looking for help for their 12 year old paralyzed dog, Snickers.  Snickers hadn’t been able to get up for 6 months, and could only drag his legs.  He had fused discs, with a grim outlook.

But, upon meeting personally with Snickers owner, she asked me about NZYMES® for horses, and told me about the problems with her daughter’s horse.  After hearing my explanation, they decided to try the NZYMES® Granules for all the animals.   Snickers incredible recovery story is coming soon, but for now, here is the story of Ghost, their horse.  ❤️

My Journey with Ghost started in the summer of 2007.

Friends of ours were looking at a property to rent. They came to us about a place they found because there were 3 horses on that property, all whom were incredibly skinny and malnourished. All thoroughbreds.

We spent a good 2 weeks, at least, trying to track down the owner of these 3 horses. Finally,  we found out he was a trainer at the local track. We bargained with him and ended up getting Ghost and another for a cheap price.

When we brought them to the barn I was at, many people advised us to put them down because of how bad of shape they were in (after a month of us already caring for them), but we declined to do that.

The following spring, both horses were thriving and happy.

Ghost has always struggled holding weight and it’s always been a challenge to feed her as much as she needed to maintain as she got bored and would throw it away.

It was that summer, I believe, that I had noticed tiny bumps on her tail-bone and well as around her rectum. they were small and didn’t impede on any function. We spoke to a vet and were advised to not manipulate them because it could cause them to start growing.

Spring of 2011, we had wanted to harvest eggs from her to breed because of the talent she had shown in various sports.

The vet advised even with a double dose of tranquilizers they couldn’t palpate in order to do a breeding exam because her tumors were too large.

As years passed I have always kept an eye on them to make sure they weren’t doing her harm.

Spring of 2014, she had her teeth floated and because of the way it was done she was in immense pain and dropped well over 100 lbs in a week as she couldn’t eat.  I spent all summer trying to put weight back on her and come late summer, I was able to ride her again.

In the Fall of 2014, she got tangled up in a gate and nearly died because of her severe multitude of injuries. It was only the quick  actions of my vet, and the strength he saw in her, that set us on the road to recovery. She dropped weight once again because of the stress and her tumors started growing. at this point she had several on each side of her crest, the ones on her tail-bone and rectum, and one under her jaw that was nearly the size of a golf ball.

She could not be stabled because of past trauma in a stall, and her anxiety made her dangerous in a confined space.  So, we set up an outdoor pen.  The vets diagnosis was that she would recover, but would never compete or be used for heavy riding again. I didn’t care because all that mattered was my heart horse was alive.

Nine months later, after major setbacks throughout winter, she had miraculously recovered. The wound had closed up and she was not only able to be ridden, but she was able to canter, jump and do barrels.

The only problem was now, she had several massive tumors (melanomas) on the outside of her body and we had no way to see if she had any internally.

The Fall of 2015 came and we had routine vet checks for teeth. We found she had a loose abscessed tooth. We kept the tooth in place because otherwise it may have caused a domino effect of loose teeth (due to poor mouth conformation). The vet advised that the clock was running out on her related to the tooth issues, or the incredibly swollen tumors rupturing and making her septic. The abscess in the tooth went away, however the tumors did not stop growing. Keeping weight on her was proving more difficult.

Fast forward a couple months ahead. She was at a new place where we had access to high quality hay, which helped her weight. She was finally looking good again.   Then one day her back was sunken, and her hindquarters flat.  She had contracted pneumonia.

Following more drugs, she got better only for her leg to abscess and rupture.

All this stress was causing the tumors to grow still and the one under her jaw was now the size of a baseball.   I grew more and more concerned. She had been battling health issues now for nearly 2 years. She was starting to look old and very tired.

Mentally I started preparing and planning to ease her into a dignified final rest just in case.

I switched her diet to less processed feeds which seemed to help and by early 2016 she had once again started looking up.  She was filling out a bit and her spirits were back.

My mom, in the meantime, was on the hunt for a supplement that would help our paralyzed senior dog.  She came across NZYMES (via Brenda Johnson). We both read up on them, and I came across a story of another girl who’s horse had melanomas and had success using this product.

I was… not skeptical, but I guess scared is the more correct term, because I had tried all the normal things to slow the growth of the tumors, and nothing had helped. If this didn’t, it would be a matter of time before I had to part with my 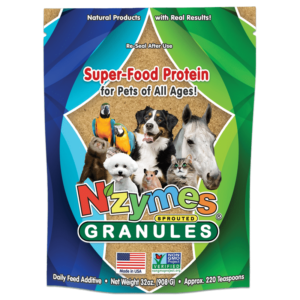 best friend who had taught me so much.  But, I am always willing to try something.  So, I got NZYMES®, and started her on the highest recommended daily feeding of this granular supplement.

In just 3 weeks, yes THREE WEEKS of NZYMES® use, my mares tumors are shrinking!!  The one under her jaw is back to golf ball sized, and the ones around her rectum have reduced in size considerably.

I am so grateful for this product. it may just have very well given me extra years with my heart horse.   Her tumors have not only shrunk, she’s quieter inside, and she is looking fantastic!

See the Comprehensive Feed Program for Melanomas, by Rachel Kitts